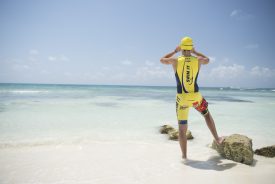 Tell us what Swim IT is and how the idea for the product came about?

The Swim IT is a race legal (USA Triathlon & Ironman) open water swim safety device for triathletes and swimmers. When worn properly on the back of the right leg, a simple pull of the inflation handle inflates and deploys a tethered life jacket. We like to say Swim IT is safety you control.

It seems like a no brainer. What are the biggest objections you get?

Objections typically fall into two categories, “ego” and “drag” (as in slowing me down). Endurance athletes are endowed with an abundance of machismo and confidence. This is a good thing normally, but not when it comes to open water safety. Usually the objections to wearing The Swim IT begin with “I’m a good swimmer,” “I swam in high school,” and the classic, “I know someone who could use that.” When confronted with the facts about fatalities in open water swims (the majority of competitive fatal swims happen to middle-aged veteran athletes), we overcome the objection and peak their interest. Also pointing out that wearing a swim safety device no more implies that you are a weak swimmer, than does wearing a bike helmet imply you’re a weak cyclist, or a seat belt equals bad driving. The Swim IT is for peace of mind and drowning prevention.

The Swim IT does not provide any competitive advantage or disadvantage while swimming. “It’ll slow me down” is easily overcome with a demo of the device or testimonials from athletes. The fact is that wearing the Swim IT properly (on the back of the leg, not the side or front) eliminates any chance of drag.  The Swim IT is so comfortable that athletes forget they are wearing it and in some cases, mount a bike while still wearing The Swim IT. So drag is not an issue.

Who is the ideal customer for this?

Triathletes and Open water swimmers are ideally suited for The Swim IT. While we always believe that you should swim in lifeguard protected waters, the reality is that some training days are less than ideal. The Swim IT augments your open water safety plan, but does not replace the need for life guards.

Is the product approved by any industry organizations. If so, what was the approval process like?

Yes! The Swim IT has been approved by USA Triathlon, Ironman, Challenge, Federación de Triatlón, and other local race directors. The USAT approval process involved several submissions and rigorous testing before being approved. The greatest hurdle to approval was achieving a zero buoyancy property, so that prior to deployment, The Swim IT would not impart an unfair advantage to the wearer.  Interestingly, USAT Commissioner of Officials and several other USAT Referees met me at Ironman Florida in 2011, where they wanted to see the Swim IT successfully protect a swimmer before granting race legal status; therefore, I did my first Ironman and wore The Swim IT for the 2.4 mile ocean swim without incident. After that, The Swim IT was granted USAT race legal status and shortly after that, Ironman approved The Swim IT for use in their events.

How long has the company been in business and have you owned other businesses before?

After being granted the first of two US Patents in 2012, The Swim IT business began selling online at www.TheSwimIT.com and directly to retail outlets in North America. Prior to The Swim IT, I started a successful Lennox Heating & Air Conditioning business from 2003 until selling the operation in 2006. I am currently a professional airline pilot and veteran military aviator.

Has Swim IT successfully saved any lives?

Yes! Officially six documented saves in both training and race swims! This is the greatest achievement of The Swim IT and an endless source of pride and good Karma!

What is the biggest challenge you have experienced as a business owner, and what have you learned?

Without a doubt, the biggest challenges for any business (including The Swim IT) is finding trustworthy people to work with and financing the operation with capital investments and loans.  Amanda McIntosh, Vice President of Operations at The Swim IT, continues to push the envelope of customer service. I can’t say enough about hiring the right people.  Without her, the business wouldn’t have been successful.  Second, if you think about it, convincing a bank or venture capitalist to invest their money into your business requires a plan loaded with compelling facts and a vision worth the risk!  The Swim IT is full of great business lessons, but the simplest one is also the hardest on—nothing happens unless you act first. Ideas can die on the vine if you never take action. Equally important is Amanda’s mantra of “Take care of the customer, and they will be our greatest asset!”

What are your plans for the company/products over the next five years?

We’ve come a long way in 6 years! In the beginning, we were manufacturing The Swim IT out of my garage using manual fabric presses to cut the patterns and stitching each unit with a sewing machine.  Over the years we employed non-profit organizations like The Lighthouse for The Blind to manufacture pieces of The Swim IT and graphic designers from Eastern Europe to create a snappy image.